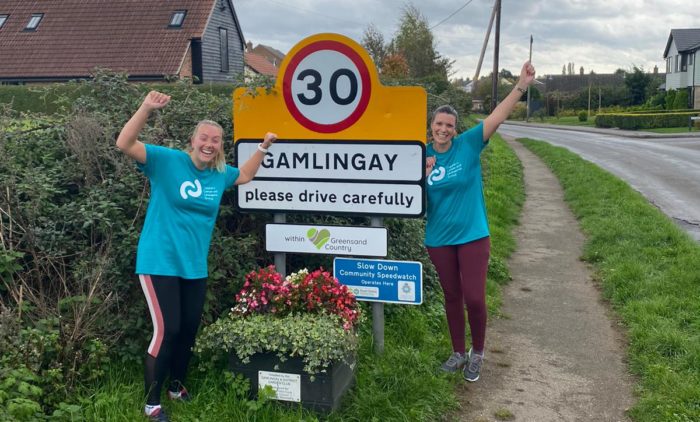 A pair of friends from Clophill ran more than 40 miles last month to raise funds for a leading children’s cancer charity.

Anne Walsh and Vikki Dear took on the Greensand Country Challenge, following the Greensand Ridge, a long-distance trail which runs from Leighton Buzzard to Gamlingay, in Cambridgeshire.

The pair were inspired to lace up their running shoes to raise money for Children’s Cancer and Leukaemia Group (CCLG) by three young girls they know that have been diagnosed with cancer, including a friend’s daughter with leukaemia.

Anne said: “We looked at CCLG and the work they do as a charity supporting families, and with their research, which is incredibly important for change and finding solutions, which in the future will benefit more children.

“So, we wanted to do something to help and were looking at different ideas.

“We’d been out running regularly together, though not very far, to keep fit and keep our minds busy during lockdown.

“When we were on one of those runs, we thought we could do a fundraising challenge that tested our mental and physical stamina, and struck upon the idea of running the 40-plus miles of the Greensand Ridge, which covers areas of Milton Keynes, Central Bedfordshire and Cambridgeshire.”

Anne and Vikki split the challenge into four sections, completing the full cross-country route over four days, within four weeks, in October.

While running through swathes of picturesque countryside and past an abundance of wildlife and historic estates, Anne said they faced some tough conditions and many steep inclines, but the thought of why they were doing it was motivation enough to see them through even the most challenging moments.

Anne said: “We did three runs that were nine-and-a-half miles. The first was tough, and very wet and quite muddy, on a tricky route.

“The bigger one was quite a challenge, it was 16-and-a-half miles, and we hadn’t realised it was going to be quite that long, as we put two routes together.

As well as raising money, Anne said she and Vikki were determined to help raise awareness of childhood cancer and what to look out for. She thanked everyone who has donated to their fundraising – which has so far raised over £1200 – and engaged with their posts on social media, helping to spark conversations on the subject and keep them going.

She said: “Thank you to everyone who has donated, and who has liked, shared or commented on posts.

“Raising awareness of childhood cancer and funds for CCLG is so worthwhile and you’ve all helped us do that.”