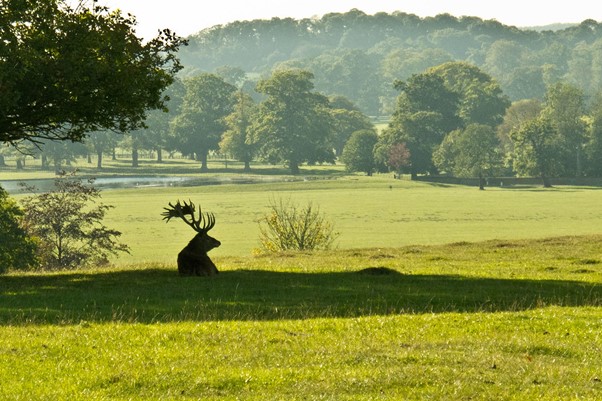 The number of deer in the UK is currently estimated at two million, with the population having doubled from 1999. With no predation, only road accidents and stalkers, the population continues to rise rapidly, supported by the growth in woodland habitats. Managing the impact deer have on the landscape is a vital element to protect habitats and biodiversity.

You might have seen deer all across Greensand Country, out in the wild or in herds at locations such as Woburn Abbey. There are multiple species of deer to be found within Greensand Country, some are species native to the British Isles, and others have been introduced throughout history. Red and Roe deer are native species, whilst Fallow deer were introduced by the Romans, and originally kept within enclosures. These populations died out and Fallow were reintroduced in the 11th century and were initially kept within deer parks. As deer parks fell out of fashion by the 15th century, being replaced by designed parkland, the Fallow became free roaming. Later on, Muntjac were brought to Woburn in the early part of the 20th century from China. These were followed by Chinese Water Deer that escaped from Whipsnade Zoo in 1929 and were introduced into select deer parks, subsequently creating feral populations. The majority of deer within Greensand Country are Muntjac, with numbers of Chinese Water Deer and Roe increasing. You can also sometimes see the occasional roaming Fallow deer. Muntjac, in particular, are a successful non-native species, their unlimited breeding season contributes to exponential population increases.

Impact on the landscape

Historically, native lynx and wolves were the natural predators of deer. However, since the extinction of both lynx and wolf populations by the 17th century, there were no natural means of predation. Deer populations continued to grow, fuelled by the decline of more controlled deer parks, and the later introduction of new species.

The exploding deer population has a substantial impact on the landscape. Talking to Sue Raven, Senior Ecologist at The Greensand Trust, the threat that Muntjac pose is very real: ‘Muntjac are very selective feeders, enjoying woodlands plants such as orchids, primroses, and bluebells, along with tree seedlings and the young shoots re-growing from coppice stools so they can have a negative impact directly on some important plant species, on the natural regeneration of trees and also on woodland management such as coppicing. This leads to changes in the woodland structure, making it a lot more open with less dense shrubby undergrowth. These changes have a detrimental effect on bird species’. Indeed, it is estimated that 8000 hectares of Site of Special Scientific Interest (SSSI) woodland is currently in ‘unfavourable’ or ‘recovering’ condition as a result of the damaging impact of deer.

With large deer populations these impacts are amplified and can prevent woodland regeneration and the wider conservation efforts that occur within woodland, as well as its associated industries such as coppiced products and sustainable charcoal production. Muntjac in particular are prone to spread across the landscape, thereby creating a wider impact on habitats. DEFRA have calculated that deer cost farmers £4.3m a year in crop damage, with our area being one of the hardest hit.

Whilst the presence of deer is advantageous in certain habitats, such as grazing that can reduce the risk of monocultures dominating a habitat and their droppings aiding seed dispersal, a widespread over-expanded population is still a national issue.

Without natural predation, it is therefore our responsibility to maintain deer populations that replicate an impact similar to natural predation, whilst ensuring deer populations remain healthy and in balance with their surrounding habitats and ecosystem. Two key aspects of management are determining where deer are present, and controlling the number present. There are a variety of ways to control where deer can access, and thereby attempt to limit their negative impact on key habitats. These range from barrier repellents (everything from lion dung to scented soaps), feeding repellents that make potential food plants unpalatable for deer, and visual and sonic deterrents such as water jets, scarecrows, and streamers. Physical barriers are also an essential means of control, with both mesh fencing and tree guards preventing deer access to areas where their grazing would harm biodiversity.

However, barriers and deterrents alone aren’t enough, as these only prevent access rather than maintain a sustainable population size. Humane culling is therefore another arm of deer management to ensure that deer populations remain stable and healthy, and biodiversity can flourish. Stalking by trained professionals, who both love and respect the deer they manage, maintains population sizes at healthy levels. Culling is also subject to clear legal protection to ensure that humane methods are used, and the ‘close season’ means that culling can only take place at particular times to protect females and their young and male deer whilst their antlers are developing.

The culled deer also provide a source of meat that has very low food miles, minimises wastage, and is a healthy alternative to fattier meats. Whilst most of the venison available commercially is farmed, being grazed similar to cattle, opting to use venison from culling can help to reduce processing, packaging, and transport emissions, as well as preventing perfectly good meat from being thrown away.

If you are interested in reducing waste, food miles, and eating more locally, why not ask local farm shops about stocking wild venison?